After a period of long winter nights, darkness and short days, the Spring season is finally the breath of fresh air. It’s the time when days are becoming longer and starts to feel warmer. Spring is when life’s alive in everything. Ayurveda being the oldest Science of Life and medicine, has the primary aim to maintain the healthy state of healthy people and secondarily it focuses on treating the ailments.

In this article we are going to discuss the seasonal regimen for Vasant ritu (Spring season) as described by Ancient Ayurvedic texts, that is very much beneficial in modifying the lifestyle of people in European countries. 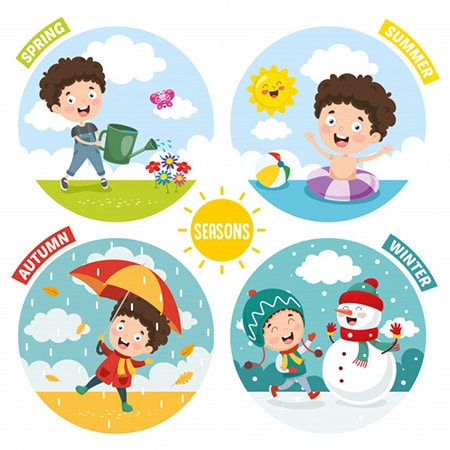 The trend of fast foods such as Pizzas and burgers along with alcoholic beverages is common. The availability of packed vegetables and fruits and other packed items are the reasons for reduced intake of fresh seasonal vegetables and fruits. Moreover, the sea foods and red meat are used frequently in their diets, which may be available in preserved or frozen form. The dairy items such as milk, curd, yogurt are also available in the packed form that also contains preservatives and other chemicals.

Dosha Involved and Their Effect on Body

The kapha dosha which was accumulated in the previous season i.e. hemant ritu is got liquified by the effect of hot sun rays in the vasant ritu. This aggravated and liquified kapha dosha will spread throughout the body through the microchannels of conduction within the body (strotas) and affect the digestive fire (kayagni) by diminishing it and producing fever, flu etc. like different diseases.

As mentioned by Acharya Vagbhata, the weakened digestive fire is the sole reason for almost all the diseases ranging from common flu to life threatening auto-immune diseases.

Here, Kapha dosha is a broad term used to define the one of the tri-energy that governs the functioning of the body when present in the normal state, this energy is characterised by its properties like heaviness, greasy/balsamic, cool, slippery, etc. which are being aggravated by dietary items having similar properties or foods rich in sweet, sour and salty tastes or some lifestyles that promotes laziness and lack of physical activity.

Thus, the dietary and lifestyle must consist of the foods and procedures that will holistically function to diminish or eliminate the aggravated kapha dosha in the body, so that it can’t manifest the various diseases. Also, the dietary and some lifestyle habits that enhance the kapha dosha must be eradicated or completely avoided.

Things to Include In Diet

The seasonal fruits and vegetables are the rich source of vitamins, nutrients, proteins, healthy fats and carbohydrates along with other essential micro and macronutrients. Such a plant based diet is rich in chlorophyll pigment which has a similar structure to that of our hemoglobin in blood. Thus, it not only helps in meeting the essential nutrients but also aids in blood purification. The fruit contains the magic molecule Nitric oxide (NO) which is a species of a gaseous reactive oxygen that has evolved as a signaling hormone that is useful in improving the overall functioning of humans. These food articles are a rich source of fibres and are easily digestible. The main beneficial seasonal vegetables available in European countries are-  Belgian Endive (Cichorium intybus) which is mentioned in Ayurveda as Kasni has numerous functions on health and has hepatoprotective actions. This vegetable can be used as a salad or as a side dish.

White asparagus (Asparagus officinalis) which is also an Ayurvedic herb known as Shatavari and it is used for blood detoxification, helps in soothing the inflammation, reduces the puffiness of skin etc. This variety of vegetable can be used in the soup form or can be used as raw as salad with mint sauce.
Leek (Allium porrum) is another commonly available vegetable during the Spring season, which can be used as a salad and can be included in any of the vegetable soup to make the warm late spring afternoon more delicious, nutritious and healthy.

Butter lettuce (Lactuca sativa) is the perfect tender salad green. It helps in improving sleep, improving vision, enhances bone strength and improves hydration. Spring lettuce can be braised with other green Spring vegetables in a light sauce for the delicious and nutritious meal.

Other than these beetroots, red cabbage, cucumbers, tomato, onions, iceberg, oak leaves and batavia like veggies can be included in the daily diet.

Seasonal fruits such as apples, sweet cherries, strawberries, cranberries etc. must be included in the diets in the raw form or in the form of freshly prepared juice.

Such as red meat (beef), or other sea foods must be avoided. As these foods are rich in glycemic and fat index and increase the kapha dosha. So, it is also advised in the texts to avoid such things.

There is predominance of kapha dosha in the body so one should consume the easily digestible and non-oily/dry foods. Specifically, one should consume food made of old barley, wheat, honey and flesh of the animals of non-tropical (dry) regions, that too cooked in the arrow.

Conventionally used alcoholic beverages must be avoided as they enhance the vitiation of tridosha (including kapha dosha) and lead to the formation of various diseased conditions.

Various fermented products made from the beneficial herbs that are available in Ayurvedic texts such as aasvas, arishtas, etc. can be used and drinking those fermented drinks along with some other drinks are indicated in the Ayurvedic texts ages ago as

These drinks not only help the body in hydrating but also helps in pacifying the aggravated kapha dosha and making the body’s internal environment suitable according to the spring season. These drinks also help in improving digestion.

The dairy items must be avoided or less frequently used.

The curd/yogurt is not used in excess during the Spring season. As it is heavy, sour and it is the substance that produces more moisture in the tissue and the main source of aggravating/vitiating kapha dosha. Moreover, the use of yogurt or curd in cooked form or during night time is strictly prohibited.

Things That Must Be Avoided In Diet

Apart from these dietary items there are a few dietary and lifestyle mentioned in the Ayurvedic texts that must be avoided during the Spring season.

Heavy meals, cold food, oily/slimy/unctuous food, and dietary items having excessive sour or sweet taste are contraindicated to take during the Spring season as these all diets lead to the aggravation of kapaha.

In spring season, the person should pacify the aggravated kapha dosha by doing following procedures

Enjoy a Healthy Lifestyle Health is an important state of …

Introduction Safed Musli is one such plant that is popular …

Dr. Vikram Chauhan (MD-Ayurvedic Medicine) is an Expert Ayurveda Consultant in Chandigarh (India). He has vast experience of herbs and their applied uses. He has successfully treated numerous patients suffering from various ailments, throughout the world. He is CEO and Founder of Krishna Herbal Company and Planet Ayurveda in Chandigarh, India. He researched age old formulas from ancient Ayurvedic text books to restore health and save human beings from the worst side-effects of chemical-based treatments.

Our website is made possible by displaying online advertisements to our visitors. Please consider supporting us by disabling your ad blocker.